Working with his Humanitas mentor, the internationally renowned filmmaker Ligiah Villalobos, John has created, in SISTERHOOD, the story of five women fighting to drive the drug dealers out of their inner-city neighborhood.

LOGLINE: Five Black women band together to stop a gang from openly selling drugs in the courtyard of their housing project, risking their lives to make a difference.

Vonda Grimes is fed up. It’s 1994. In a mid-sized Rust Belt city, crack is openly sold in the courtyard of her housing project. When one dealer tries to recruit her 12-year-old son, Vonda and her friends swing into action. Facing an indifferent mayor and an overwhelmed police force, the women gain the attention of a reporter, who exposes the drug trade. But an impending gang war and the upcoming mayoral election complicate their efforts. And even if successful, will their achievement be short-lived? Or cost free? THE AMEN SISTERHOOD is the story of five women risking their lives to make a difference and protect their children. 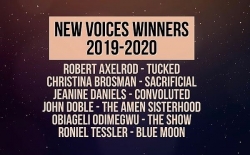